What You Need to Know About the Penguin 3.0 Algorithm Update

Ranking algorithms are constantly being tweaked.

Google changes its algorithm around 500 to 600 times a year. Occasionally major updates are rolled out that significantly alter the search results. Whenever they occur there is always a great deal of buzz in the industry about the implications and what it means for businesses. Google released the third major iteration of its Penguin update.

Data from AdvancedWebRanking show major fluctuations in the search results around the time of its release: 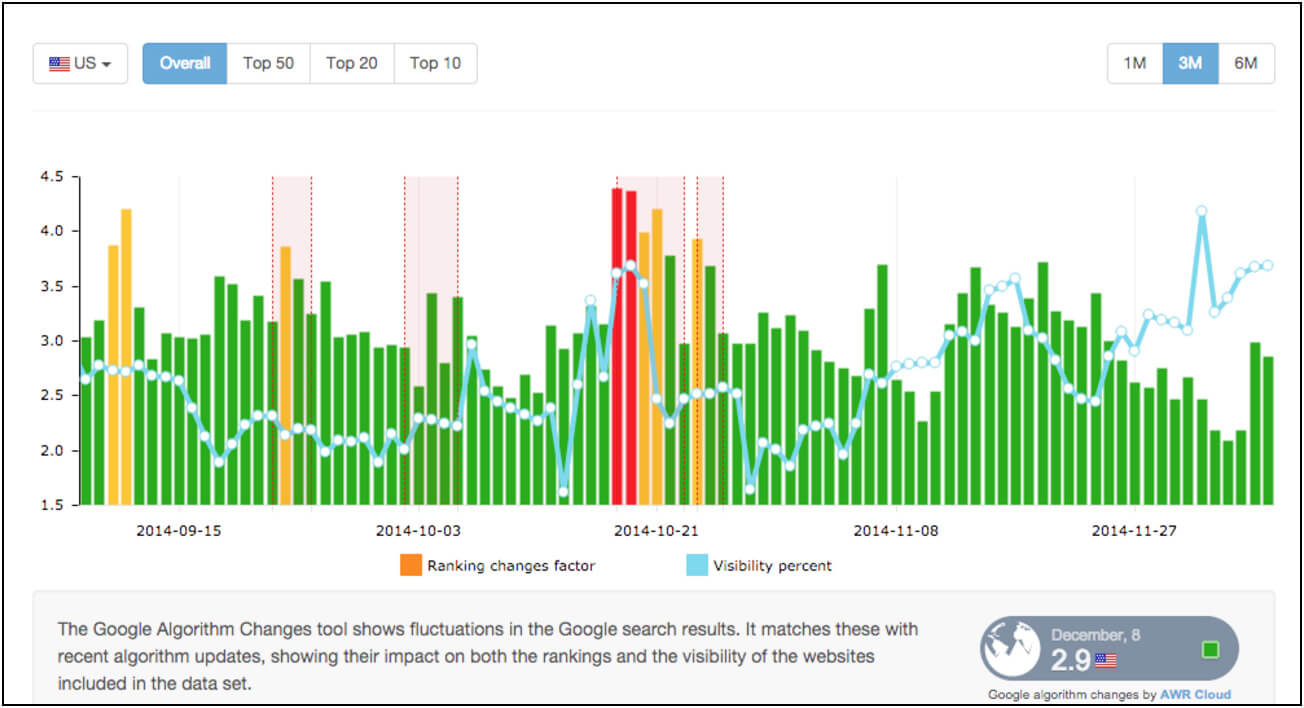 If your site saw a drop in rankings, it could be due to the Penguin update. Even if it didn’t there is still a chance that your site could be affected in the future. Here we provide more information about what this algorithm update is and what it means for your business.

The first iteration of the Penguin update was launched in 2012. Its purpose was to combat the rise in webspam of sites that achieved rankings in the search results through manipulative tactics such as link spamming. The site penalised sites engaged in practices that directly violate Google’s Quality Guidelines.

Approximately 3.1% of all search queries were affected, a substantial amount when you consider just how many searches Google processes on a given day. The next iteration was launched the following year which takes the update a step further to combat spam and other black hat techniques.

The launch of Penguin 3.0 was not as significant as the previous iterations as it only affected approximately 1% of all search queries. It was only meant as a data refresh. A good number of sites engaged in questionable tactics saw their rankings tank. And sites that were previously affected by Penguin but cleaned up their site saw a lift in rankings.

Google strives to deliver the most relevant results.

It simply cannot afford to reward sites that earned rankings through questionable tactics. Otherwise the search results would be filled with spam and users may instead turn to alternative search engines to find information online. Here are practices to stay away from if you want to maintain your rankings:

Links still matter but spamming thousands of them to your site will result in a ranking penalty.

To protect yourself against future algorithm updates, stay away from questionable link building practices and focus your efforts instead on acquiring links from relevant sources.

Use tools such as ahrefs to identify spammy links and take measures to remove them. This involves contacting webmasters directly and requesting removal of your site. Another option is to use the Disavow Tool which tells Google to completely ignore certain links.

The Penguin 3.0 update was more of a data refresh but it penalises sites engaged in questionable link building practices while rewarding higher quality sites. Take steps to have spammy links removed from your link profile and focus instead on building relevant links.