How To Tackle Ad Fatigue in Your Search, Display & Remarketing Campaigns

There are many steps in creating a well optimised AdWords campaign, but even when you have implemented all the right techniques, there can still be challenges ahead.

There are many steps in creating a well optimised Google Ads campaign. New challenges will always present themselves when you are managing a Google Ads campaign. Even when you have implemented all the proper techniques, unique, unanticipated obstacles are likely to arise due to the fast-moving nature of the online marketing industry.

Even PPC professionals with substantial Google Ads management experience can encounter the problem of ad fatigue.

Ad fatigue is the bane of many PPC campaigns that have been running for a reasonable period of time and it can be very detrimental to your campaign’s ongoing performance.

What is ad fatigue?

Ad fatigue is characterized by a decline in CTR after your ads have been running for a while, following initial campaign success.

Essentially the same users are repeatedly exposed to the same ad and become bored or irritated by them.

Ad fatigue is a challenge to your campaigns because, instead of enticing people further down the conversion funnel, the ads begin to have no effect, or worse repel people.

The difference between ad fatigue and banner blindness

Ad fatigue is regularly confused with the phenomenon of banner blindness but they are in fact unique issues with different causes.

While banner blindness and ad fatigue do share some similar features, having beautiful ads and improving ad relevance is usually not sufficient to tackle ad fatigue.

Banner blindness can occur for a user seeing an ad for the first time. It is caused by the ability to ignore ads in general, whereas ad fatigue can take place even with well targeted, high quality ads, due to being seen too many times.

Have you ever had the experience where you just want to read your favourite newspaper online or log into online banking and the same annoying ads are there? That is ad fatigue in action.

Ad fatigue is more common on the GDN than with search ads since, with displays ads, you are targeting specific placements or people by interest. This creates an environment where an audience pool is likely to see an ad multiple times because it appears repeatedly on a site they visit.

When setting up any PPC campaign you should always have a collection of varied ads, whether it’s on the display network, search or remarketing. This helps you to test which ads work best with your target audience.

Producing varied ads is not only useful for A/B testing but also in tackling ad fatigue. Even if you have conducted multiple A/B split tests and found an ad format that was producing great results, it is still a good idea to try new formats if CTR begins to drop. Research shows time and again that campaign performance will decrease if you fail to update your creatives. According to case studies carried out by industry insiders Retargeter: “after five months of running the same set of creatives, on average CTR falls by half from an average of 0.21% to an average of 0.12%”.

While some advertisers are enthusiastic about A/B testing to begin with, there is often a danger of becoming complacent. Ad variation is easily the most important factor in preventing campaign stagnation and it doesn’t always have to be costly or time consuming. Subtle changes can be enough to re-engage a web user’s attention. Well known digital marketing influencers Wordstream found that a small change, such as altering the background colour of an ad could improve performance.

The examples below from UpWork and Google Ad’s own display campaign are perfect examples of how small changes in colours and graphic can really freshen up your ads:

Although small tweaks can be effective, if advertisers really want to re-grab a user’s attention or appeal to a diverse audience they should not be afraid to experiment with more radical ad variation.

If your CTR has begun to decline and small tweaks are not making a big enough impact, adding a completely fresh face to ad creatives can often be the key. The advantage of very different ad styles is the potential to open your campaign up to new audiences with different tastes who may not have converted before.

Below is an example of Google AdWords using a very different ad creative to great effect. 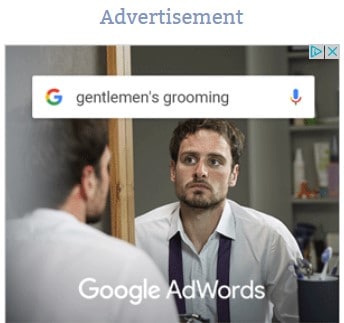 In previous examples, we observed subtle, straightforward ads but here Google is highlighting how appealing their services can be to the potential customers of their advertisers, using the specific example of men’s grooming products. 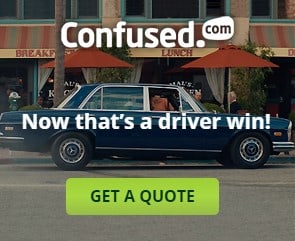 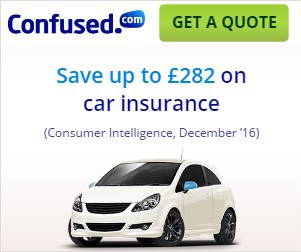 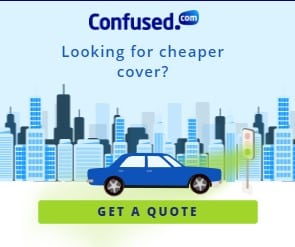 Once advertisers have embraced ad variation as a key tactic in their Google AdWords management they need to ensure users actually see the new ads.

Previously, it is likely you will have seen the best results in your campaigns by optimising for conversions or clicks. This means AdWords will show the ads that have performed best in achieving these goals more frequently.

Don’t be afraid of experimenting with different ad rotations. Try altering your campaign to rotate ads evenly or indefinitely, in order to collect decent data on your new creatives’ performance.

To change your rotation setting, select your desired campaign, then click the settings tab.

Scroll down to advanced settings and expand the second option of ad delivery. 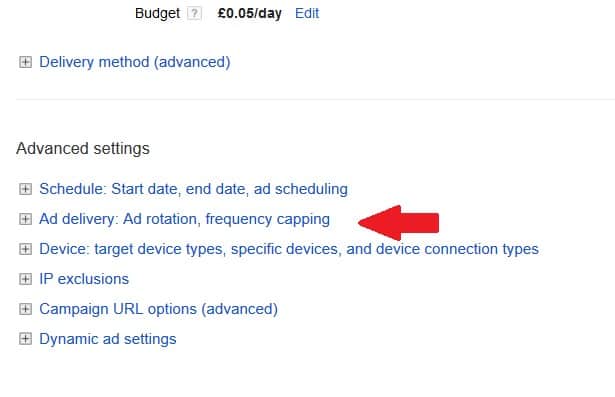 This will open up your rotation settings and show what your campaign is currently optimised for. Click edit.

Frequency capping is a good way to preserve ROI and CTR by tackling ad fatigue at its source.

Although seeing an ad multiple times can cause ad fatigue, we do not recommend limiting ads to one view per user. When browsing the web, people are often busy or distracted and it may take seeing a relevant ad a few times before they are tempted enough to click.

To set your frequency capping, simply head to your desired campaign and click settings. Scroll down to advanced settings and open the ad delivery option just as you did for ad rotation. 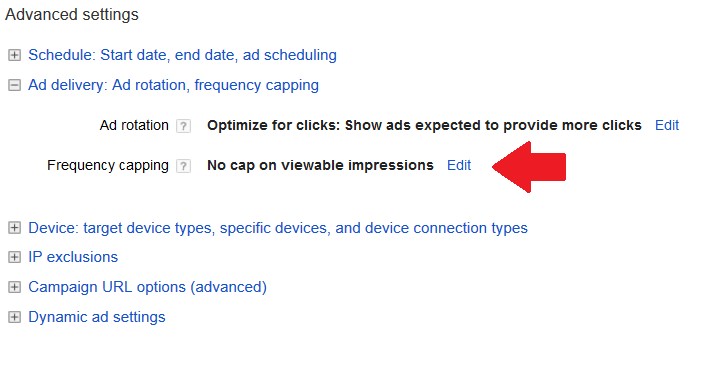 Now choose an appropriate impression limit per user by day, week or month and click save.

While frequency capping is a good tactic you should not abandon ad variation. Frequency capping works on a rather big assumption: that the user saw your ad, understood your message and either clicked or was not interested. In reality a user may have been tempted but short on time or money. A reminder a few weeks or months later may have given them the push they needed. Consider ad variations that focus on discounts as the campaign ages.

The more niche your service or product is, the smaller your audience pool. This means the likelihood of the same people seeing your ad multiple times increases if you have a niche business. In a smaller pool use a lower frequency cap than one with a larger audience pool. As well as not irritating your valuable target market it, will help limit your ad spend. With a niche service, it is important to ensure your budget is big enough to allow new impressions, as you are already working with a smaller pool of people compared to other campaigns.

You should also lower the frequency cap the longer your campaign runs. The longer it runs the lower the cap and the more you will need to update creatives and do experiments.

While ad fatigue is common in display campaigns it can sometimes affect search campaigns too. It is less frequent in search campaigns because they are query based. As Google’s algorithms get smarter they become better at producing relevant results to search queries but there is still room for improvement. If a user is doing research into a product, service or topic they may attempt the same search query or variations of that query multiple times and encounter the same ad.

The key to avoiding ad fatigue in search ads is to make sure your ad copy is relevant to your target keywords and of course using ad variation. While you cannot add a frequency cap to a search campaign you can experiment with ad copy variation, just as you would with display ads. Advertisers need to conduct A/B tests throughout a search campaign to ensure the ad copy really answers the users’ potential queries. Great ad copy should still be a firm foundation of your search campaigns.

Ad customisers are another excellent strategy for freshening up your search ads. By adding a countdown timer to that special event or limited time deal, you add a little more incentive and draw eyes back to your ad. Check out our previous blog on creating effective ads for a guide on adding ad customisers. 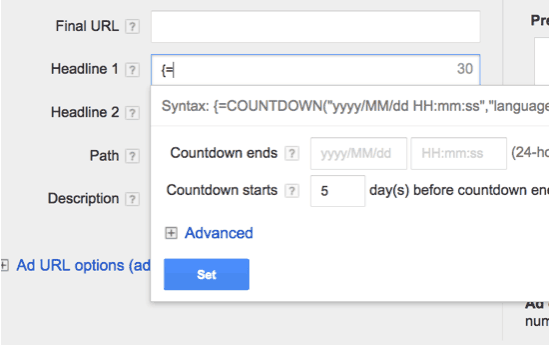 Naturally the problem of ad fatigue is especially prominent in remarketing campaigns. Remarketing targets ads to users who have visited your website before, hence you are working with an even smaller audience pool. The very nature of remarketing means that the same ads follows users around the web.

However, advertisers should not avoid remarketing. When advertisers learn to adequately manage ad fatigue in remarketing, they can increase conversion rates over time.

Interestingly research from Wordstream reveals that, while CTR does decline over time in remarketing campaigns the conversion rate can still increase compared to other campaigns. This is because you are targeting a smaller audience pool but one that is genuinely more interested in your product/service. In remarketing, advertisers should focus less on declining CTR when monitoring for ad fatigue and focus primarily on their conversions.

Surprisingly, remarketing ads have greater longevity, despite the smaller pool of potential viewers. Wordstream reports that remarketing display ads “fatigue at half the rate of regular display ads”.

Nevertheless, as Adotas point out in their insightful article on remarketing, every audience pool has a point of saturation and the narrower the audience, the sooner that point arrives.

That is why it is even more important to regularly review your creatives to avoid ad fatigue in remarketing. Frequency capping is especially helpful on remarketing campaigns where advertisers want to give interested parties a gentle reminder without frustrating them.

Advertisers should revamp ad creatives more frequently in remarketing campaigns. Tailoring creatives to segmented audiences for increased relevancy is also a big advantage in tackling ad fatigue. By targeting users by the products/services they have viewed or actions they have taken (e.g. abandoned shopping cart), rather than just targeting all previous site visitors, you can create remarketing ads that are more appealing. You can also update remarketing ad creatives with special offers and discounts on the specific products your audience showed interest in for added incentive. Take a look at our article on useful remarketing audience lists to help you get started.

Another method for tackling ad fatigue and taking your ad targeting to the next level is programmatic advertising. This is often heralded as the ultimate solution to the ad fatigue problem, thanks to its advanced behavioural data but if you are not ready for programmatic advertising yet, you can still experience great results with the simple techniques of ad creative experimentation and frequency capping. The trick is to always follow your data but never be afraid to try new ideas in your creatives.

While ad fatigue may seem like a tricky conundrum at first, it is actually a great opportunity. Advertisers who are willing to put in the time to tackle ad fatigue will reap the rewards. You will improve CTR, conversion rates, ROI and gain even more insightful data.

How to Increase Your Keyword Quality Score

How to Get More Targeted Traffic Using Gmail Sponsored Ads